When a Touch Really isn’t a Touch

When we look at using an HMI touch system in an outdoor environment, there are many things that must be considered in order to provide a positive touch experience to the user.  There are times when the unit has to be placed out in the elements in order to make the application viable, such as vehicle access gates, residential locks and remote access panels for garage door openers.

As you will see, Cubbison’s HSS™ provides a touch platform that allows you to defeat the limitations that cause standard touch technologies to fail in this environment.

User Preferences
User preferences such as wearing gloves which during the Coronavirus pandemic is a requirement, is just another substrate variance and does not reduce our ability to acquire a signal from the electrode, therefore we can readily recognize a touch signal when gloves are worn by the user. 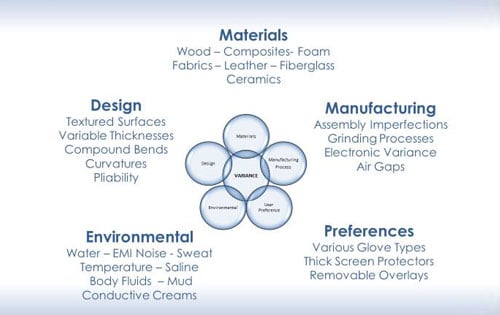 System Variance
Cubbison HSS™ is the only touch recognition technology in the world that inherently overcomes VARIANCE.   In a system environment, variance can take many forms.  We define variance as any deviation from the original physical or electrical design parameters.  Everything from an environmental contamination in the field to variable impedance in the electrode structure represent a system variance.  Fig 1 is a good representation of where system variances occur.  By their nature, some products are more prone to certain variances than others.  A dishwasher control HMI system has to deal with humidity and electrical noise to a larger degree than a printer control panel would. The advantage of HSS™ is that it inherently offers much better variance tolerance than other technologies.

How does HSS™ manage to accomplish this?  The answer lies in Signature Recognition.  Instead of simply looking for the capacitive electrode to have a delta C of X amount, we actually apply intelligence to the signal that is generated at the electrode and determine if the signal shape truly represents a finger touch.  As it turns out, a finger touch signature is fairly consistent and can be recognized as long as the signal itself is managed properly.

Because of this, there are three parts to an Cubbison HSS™ touch system.

THE THREE PARTS OF A Cubbison HSS™ TOUCH SYSTEM
The Electrodes are where the signal is generated by a finger touch.  Signal Conditioning prepares the signal for analysis by the HSS™ Software.  Intelligent analysis allows us to differentiate between desired touch signals and undesirable inputs.

AlSentis has significant IP in all three areas

Contaminants
External contaminants such as water and cleaning solutions on the panel face can cause catastrophic failures in threshold based systems.  HSS™ is inherently immune to these failure modes.

At the beginning of the event:
When rain water or other contaminants hit the surface of the touch panel, the delta C occurs very rapidly.  In a threshold sensing system, the delta C can cause the DC component of the signal to fall below the threshold which is considered a “touch” and the system responds accordingly.  We call this a false trigger because it is not a true finger touch but the system cannot tell the difference.

HSS™ on the other hand analyzes the signal looking for a signature shape.  The delta C occurs so fast that the signature recognition software eliminates the event as a “touch” because a real “touch” doesn’t occur that rapidly.  We are basically treating these signals as ‘noise’.

During the event:
If the panel is mounted vertically, there will be minimal continuing effect because the water will run off the panel.  In this case, the threshold sensing system may or may not return to normal but only until the next rain drop hits the sensor.

Our HSS™ panel, however, never registered the rain drop as a touch to begin with so there is no residual effect, even when the next rain drop hits the sensor.  If we touch the panel during the rain event, we still get a signal from the panel that can be analyzed for a signature allowing HSS™ to recognize a true finger touch, even during a rain event.

Power
Outdoor systems are typically battery powered and therefore require special consideration.  Energy conservation and operational responsiveness become a balancing act when the system is powered by batteries.  Low energy consumption can be partly achieved by slowing the system down which obviously is detrimental to the system responsiveness.  An intelligent balance of power management techniques and operational requirements can produce great battery longevity and still maintain the desired user experience.  The AlSentis HSS™ Enhanced Low Power (ELP) chipset and DevKit provide the designer with the solutions and tools necessary to achieve the ultimate product design.

Normal temperature variation occurs over an extended length of time and the HSS™ signature recognition system ignores it as a possible touch input.  Since HSS™ doesn’t use thresholds, the touch signal is still valid and HSS™ signature sensing is not impaired

Cubbison is a manufacturer of industrial and commercial product identification products and flexible electronic devices. More →